Abstract: Much of today’s robotics research aims to place humans in the vicinity of, and in contact with, robots for cooperative or co-existing tasks. This cooperative behaviour exploits the abilities of the human and robot to synergistically complete a task. One obvious requirement in such a physical human-robot interaction setting is to ensure safety.
However the concept of safety has taken on many different definitions in the literature. Originally, robots were confined away from humans such that safety meant that the robot remained inside a pre-defined operating region at all times. However in cooperative tasks, this idea of safety no longer holds and more compliant behaviour is desired when combining humans and machines. In this talk, I will discuss a few key points regarding safety and present recent work on a control law that guarantees safety and passivity in the presence of humans. 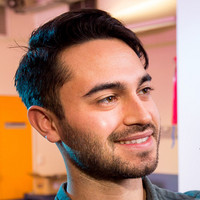 Bio: Wenceslao Shaw Cortez is a postdoctoral researcher at the KTH Division of Decision and Control Systems working with Professor Dimos V. Dimarogonas. Wences received his Bachelor of Science diploma in 2012 and Master of Science diploma in 2013 both in Aerospace Engineering from the University of Colorado Boulder, USA. He received his PhD in Mechanical Engineering in 2019 from The University of Melbourne, Australia. His research interests include nonlinear systems, constraint-satisfying control, robotic grasping/manipulation, and aircraft guidance, navigation and control.