Jiang Hu is a professor in the Department of Electrical and Computer Engineering at Texas A&M University. He received a B.S. degree in optical engineering from Zhejiang University (China) in 1990, an M.S. degree in physics in 1997 and the PhD degree in electrical engineering from the University of Minnesota in 2001. He worked with IBM Microelectronics from January 2001 to June 2002. He joined Texas A&M University in 2002. His research interest is in VLSI design automation, architecture optimization, hardware security, machine learning applications and smart systems.

He has served as a technical program committee member for DAC, ICCAD, ISPD, ISQED, ICCD, DATE, ISCAS, ASP-DAC and ISLPED. He is the general chair for the 2012 ACM International Symposium on Physical Design. He served as an associate editor of IEEE Transactions on CAD and an associated editor for the ACM Transactions on Design Automation of Electronic Systems. He received the Humboldt Research Fellowship in 2012. He was named an IEEE Fellow in 2016. 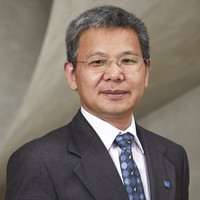